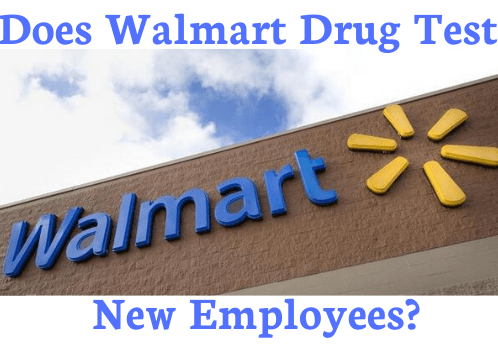 “Does Walmart drug test?” This is one of the questions I receive most often from my readers. Everyone knows Walmart and almost everyone has a store nearby. It’s no secret that Walmart is one of the best places to look for a job due to its accessibility and variety of jobs available.

Therefore, knowing whether or not a workplace drug tests for employment as part of their hiring process can significantly enhance your chances of passing the job interview.

If you are a recreational drug user and your prospective employer dose in fact tests for drugs, you’ll still be able to apply for, and secure, your dream job just by abstaining from drugs well in advance of your job interview.

Walmart, headquartered in Arkansas, was founded by Sam Walton in 1962. The company has been rapidly growing ever since. As of October 2019, Walmart has over 11,400 stores in 27 countries. The number of those working for Walmart in the U.S. is huge, with the company employing over 1.5 million people in this country alone.

The fact that Walmart has so many stores and hires a lot of people makes it easy to understand why so many people are looking for a job there. You can apply for a job as a cashier, warehouse associate, store assistant, or at corporate headquarters in accounting, finance, etc. It’s a place where people with different backgrounds get a chance to work and thrive.

Even those who are just looking for a summer job to gain job experience can work at Walmart in an entry level position. Alternatively, those with several years of experience can get a job there at a more senior position.

Walmart does not accept, or tolerate, people working for them under the influence. The main issue with working at Walmart while on drugs is that the possibility of getting into an accident. Accidents lead to customer complaints and injury to the person affected and potentially others.

While working at Walmart, the best policy is to abstain from drugs – at least while at work. If you’re to be drug tested, expect them to test you for marijuana, benzodiazepines, barbiturates, opioids, cocaine, amphetamines, and others. If your test result comes back positive for any of these drugs, your contract could very well be terminated.

What to Expect During Walmart Hiring Process

The hiring process at Walmart has minor variations among its stores, but is mostly the same throughout the country. Most people can apply for jobs at their local Walmart online through the company’s website. You’ll then need to wait for them to call you to schedule an interview.

Their interview is simple and uncomplicated, as they’re usually looking to hire. Passing the interview shouldn’t be too hard, even for those who are inexperienced.

As part of the hiring process, they’ll normally perform a background check, which can take between two days to a week. If your background check is o.k., you will be hired. They’ll call you to schedule an orientation session before you start working.

Does Walmart Do Pre-Employment Drug Test?

To get a definitive answer on whether Walmart stores drug tests in your area, you should ask people at your local store who work in the same division you want to apply to if they were drug tested or not.

Does Walmart Do Random and Pre-Promotional Drug Test?

When you’re hired, Walmart will have you sign a contract that says they’re allowed to drug test you when they see fit. Some stores choose to randomly drug test their employees, while others will only drug test if you’re involved in a work accident.

The best way to avoid getting fired because of a random or unprovoked drug test is to quit doing drugs while you are employment there.

Those working there should expect to be drug tested when applying for a managerial position. Additionally, if you’re up for a promotion, you’ll almost certainly have to pass a drug test before getting it. If you really value working at Walmart and are looking forward to being promoted, it is a good idea to stop using drugs for a while.

What Kind of Drug Test Does Walmart Use?

Walmart relies on urine drug tests. This is true whether you’re being tested as an applicant, employee, or up for promotion. The company will send your urine sample to a lab for testing.  The lab will report the results back to Walmart, who will then inform you if you passed or not.

Can You Fail Your Test for Using Prescription Drugs?

People who use prescription drugs can’t fail a drug test at Walmart. It wouldn’t make sense for them to refuse to hire someone only because they’re on drugs that they are prescribed for their health such as benzodiazepines or amphetamines.

If you’re on a drug that can show up positive on a drug screen, you need to let them know in advance. You can give them your doctor’s contact name and info so they can get in touch with him or her and confirm that you’re on a prescription.

Neither you nor your doctor is obliged to disclose the type of drug you’re taking, or why you’re taking it. That’s confidential information to be kept between the two of you and not shared with others.

How to Pass Urine at Walmart?

If you are informed that you have to pass a urine drug test at Walmart, you need to make sure that you ether abstain long enough in order to detox your body naturally, or consider using a reliable detox program or drinks.

So, if you only smoke marijuana once a week, you should abstain from using the weed for at least 4 to 6 days before the test.

If you have enough time before your test, just stay away from using marijuana and other drugs.

But if you are running out of time, you might consider completing a whole body Toxin Rid detox program combined with light aerobic exercise, visiting a sauna, drinking plenty of water and maintaining a healthy diet well before the test.

If you don’t have enough time to cleanse your body from THC, on the drug test day you might consider drinking a detox drink like XXTRA Clean or Herbal Clean QCarbo20. Such detox drinks are most effective for the light and moderate users.

Walmart is a great place to work. If you’re interested in applying to a job there, your likelihood of getting drug tested will increase if you’re applying for a managerial position or a job in the pharmacy.

To confirm whether or not you’ll be drug tested, I recommend asking someone who works in the same department at the branch to which you’re applying if they drug test or not. The point is that there are variations in testing as part of the hiring process among departments and stores.

Thank you for reading our article “Does Walmart Drug Test New Employees?”

We would love to hear about your experiences going through the Walmart hiring and drug testing process.

We believe others who are applying for jobs at Walmart will definitely appreciate and benefit from them also.